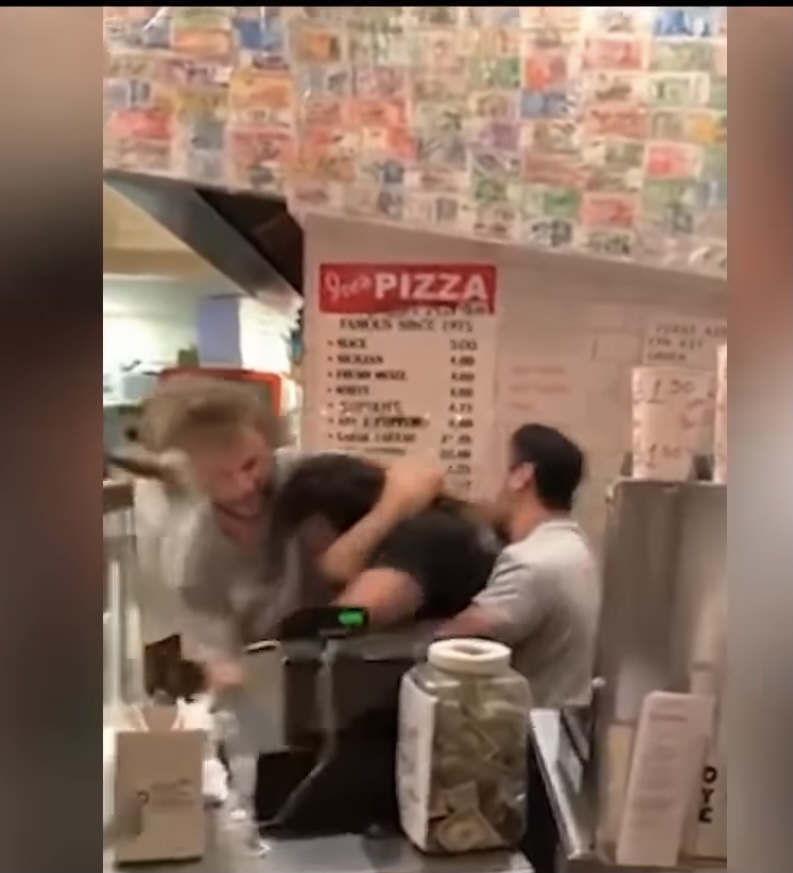 ROCKLAND COUNTY, NY – —  A Rockland County resident has been arrested following a wild brawl in a Brooklyn pizza place in early July. The chaotic video that has gone viral, shows multiple men fighting with various cooking supplies. The fight would leave at two men with injuries.

The NYPD said 33-year-old Erind Prelvukaj, of West Nyack, was arrested and hit with assault charges.

He recently spoke with PIX11’s Anthony DiLorenzo and explained it all stemmed from drunk customers harassing a woman inside the slice shop and a worker trying to intervene.

According to police, it all happened around 3 a.m. back on July 17 when several customers got into a fight with employees at Joe’s Pizza on Bedford Avenue in Williamsburg.

Cellphone video captured the chaos that unfolded inside the pizza parlor. At one point, a worker can be seen swinging a wooden pizza paddle and then metal ladle.

WATCH VIDEO OF THE INCIDENT BELOW

Read the Full Article via PIX11 below

A 34-year-old employee was punched in the face and taken to an area hospital for treatment, while a 32-year-old man who was helping customers was also punched and taken to the hospital, police said. It was not clear if he was an employee.

Preluvkaj on Tuesday said he was not the instigator and plans to get a lawyer to clear things up with police. He said surveillance video will show more of the story than what is seen in the now-viral cellphone footage.

“I have been in that shop several times. I have a clean record. Why would I try to do something like that? I have family, kids,” he said.

According to Preluvkaj, some men were harassing a woman when one of the workers told them to knock it off.

“He threatened to call the police and pushed the customer,” Prevlukaj recounted. Things spiraled out of control from there, he said.

Police have not confirmed Preluvkaj’s narrative of the events leading to the fight.

“I was trying to control the situation,” he said. “It looks like I was beating them up but I was protecting myself,” he added.

Preluvkaj believes he was the only one arrested because he was one of the only people who stuck around after the ruckus.