NYACK, NY – Today, May 17th, marks what would have been the 44th birthday for Rockland County Hero Welles Remy Crowther, who on 9/11/ 2001 was a 24-year-old equities trader who used his fireman skills to save as many as 18 people when the South Tower was attacked.

Welles grew up in the Village of Nyack. At 16, Crowther joined his father as a volunteer firefighter, becoming a junior member of the Empire Hook & Ladder Co 1. After graduating from Nyack High School, he would attended Boston College, where he played lacrosse. After Boston College, he moved to New York City to take a job as an equities trader for Sandler O’Neill and Partners on the 104th floor of South Tower of the World Trade Center. 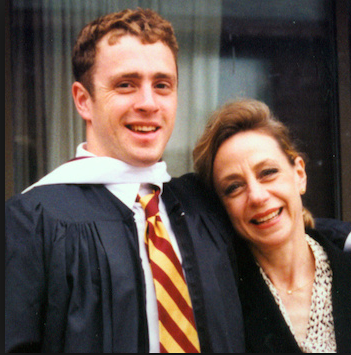 After the plane crashed into the building, Crowther immediately made his way to the 78th floor sky lobby, where he encountered a group of survivors, including a badly burned Lin Young (video included in link below), who worked on the 86th floor in New York’s Department of Taxation and Finance. Young had been one of about 200 people waiting at a bank of elevators to evacuate when the plane hit the tower and among the few survivors. Crowther, carrying a young woman on his back, directed them to the one working stairway. The survivors followed him 17 floors down, where he dropped off the woman he was carrying before heading back upstairs to assist others. By the time he returned to the 78th floor, he had a bandana around his nose and mouth to protect him from smoke and haze. He found another group of survivors, which included AON Corp. employee Judy Wein, who worked on the 103rd floor and was in pain from a broken arm, cracked ribs and a punctured lung. According to Wein, Crowther assisted in putting out fires and administering first aid. He then announced to that group, “Everyone who can stand, stand now. If you can help others, do so.” He directed this group downstairs as well. As occupants of the Tower headed for the street, Crowther returned up the stairs to help others. He was last seen doing so with members of the New York City Fire Department (FDNY) before the South Tower collapsed at 9:59 a.m.

Crowther’s family was unaware of the details of his heroism, until Allison Crowther read Judy Wein’s firsthand account in The New York Times of being saved by a man in a red bandana, which led to Allison meeting with the people Welles had saved, including Wein and Young. They confirmed from photographs the identity of the man who aided them. According to survivor accounts, Crowther saved as many as 18 people following the attacks.

Welles was found on March 19, 2002 with the FDNY members and emergency workers who were also in the South Tower Lobby when it collapsed.

Please join us we remember a Rockland County resident who is nothing short of a hero on his birthday. Welles’ actions and character on 9/11 continues to inspire people all around the world. We will #neverforget Welles Crowter – Happy Birthday.

“Licensed guides play a crucial role in safely introducing New Yorkers to the many natural treasures around them,” Commissioner Seggos said. “I encourage outdoor enthusiasts who want to pass on their knowledge to others to take the exam and grow their environmental stewardship.”

A guide must be at least 18 years of age. Guides offer services for hire, directing, instructing, or aiding others in a variety of recreational activities. DEC’s Special Licenses Unit administers licensing of outdoor guides. Applicants are not required to be New York State residents to receive a license.

To provide enhanced access to examinations, DEC is offering licensed guide examinations online in 2023. Dates and registration details are below:

To register, directions are available on DEC’s 2023 Licensed Guide Exams Registration website. Applicants will receive an email acknowledging registration and an additional one-time link for use to access the website on the date of the exam. Upon successful completion of the exam(s), applicants will receive information on applying for the appropriate guide license, including an application form. Please do not send applications or fees prior to passing the examination(s).

An outline of exam content, a study guide, and additional information can be found on the DEC Licensed Guide Program website. The Fieldbook, a reference book published by the Boy Scouts of America, is also recommended and can be found at a local library or bookstore. A list of current New York State Licensed Guides is available online. 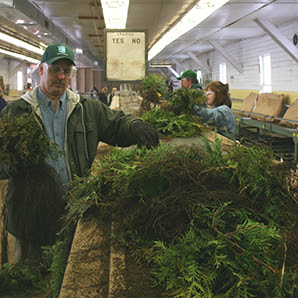 The Colonel William F. Fox Memorial Saratoga Tree Nursery annual spring seedling sale is open to the public and runs until May 12. Each year, the nursery offers low-cost, New York-grown tree and shrub species for sale to encourage plantings that help conserve the state’s natural resources and foster the next generation of forests.

Trees provide a variety of benefits:

DEC’s tree nursery grows more than 50 conifer and hardwood species from local seed sources, creating seedlings that are well-suited to our state’s climate. They are available in bundles of 25 or more, plus there are several mixed species packets for those looking for a variety. Seedlings are a minimum of five inches tall and are one to three years old depending on the species. For more information including how to order, visit the Spring Seedling Sale webpage on DEC’s website. Some species sell out early, so it is recommended to place orders by phone for the most up-to-date availability information.

Free Seedlings Available for Youth Education Through the School Seedling Program
Applications are now being accepted for the nursery’s School Seedling Program. From now until March 31, schools and youth education organizations across New York State may apply to receive up to 50 free tree or shrub seedlings to plant with their students.

All schools (public, private, nursery, elementary, secondary, vocational, college or university), homeschool groups, and any youth education-based organization may apply, provided trees are planted within New York State. Individual homeschools must apply through a homeschool group, co-op, or other association. Seedlings are two to three years old, about four to 12 inches tall, and bare-root. There are three packets available – 50 white spruce, 25 red oak, or 30 mixed shrub species good for wildlife habitat – and each school or organization may only receive one packet per year. Visit DEC’s website for more information and to apply online. For assistance or questions, contact the Colonel William F. Fox Memorial Saratoga Tree Nursery at [email protected] or 518-581-1439.