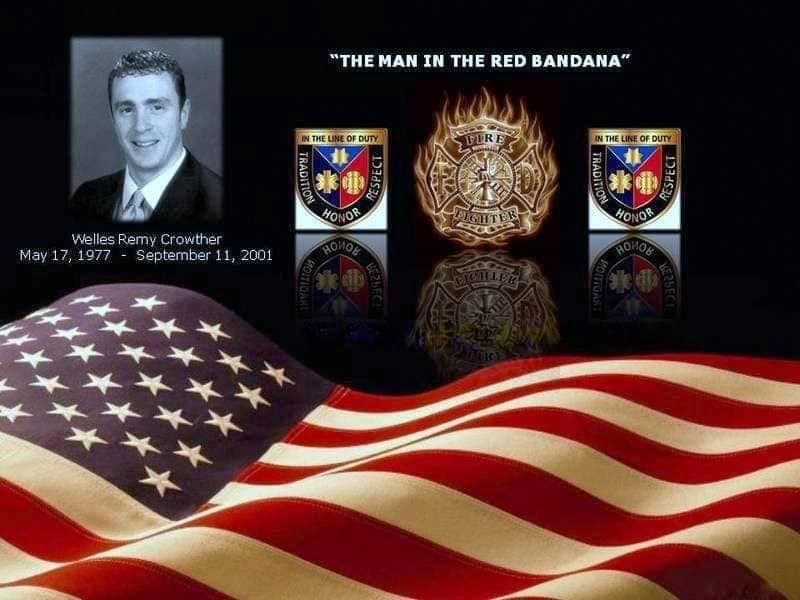 At 16, Crowther joined his father as a volunteer firefighter, becoming a junior member of the Empire Hook and Ladder Company. After graduating from Nyack High School, he would attended Boston College, where he played lacrosse. After Boston College, he moved to New York City to take a job as an equities trader for Sandler O’Neill and Partners on the 104th floor of South Tower of the World Trade Center.

After the plane crashed into the building, Crowther immediately made his way to the 78th floor sky lobby, where he encountered a group of survivors, including a badly burned Lin Young, who worked on the 86th floor in New York’s Department of Taxation and Finance. Young had been one of about 200 people waiting at a bank of elevators to evacuate when the plane hit the tower and among the few survivors. Crowther, carrying a young woman on his back, directed them to the one working stairway. The survivors followed him 17 floors down, where he dropped off the woman he was carrying before heading back upstairs to assist others. By the time he returned to the 78th floor, he had a bandana around his nose and mouth to protect him from smoke and haze. He found another group of survivors, which included AON Corp. employee Judy Wein, who worked on the 103rd floor and was in pain from a broken arm, cracked ribs and a punctured lung. According to Wein, Crowther assisted in putting out fires and administering first aid. He then announced to that group, “Everyone who can stand, stand now. If you can help others, do so.” He directed this group downstairs as well. As occupants of the Tower headed for the street, Crowther returned up the stairs to help others. He was last seen doing so with members of the FDNY before the South Tower collapsed at 9:59 a.m.

Crowther’s family was unaware of the details of his heroism, until Allison Crowther read Judy Wein’s firsthand account in The New York Times of being saved by a man in a red bandana, which led to Allison meeting with the people Welles had saved, including Wein and Young. They confirmed from photographs the identity of the man who aided them. According to survivor accounts, Crowther saved as many as 18 people following the attacks.

Welles was found on March 19, 2002 with the FDNY members and emergency workers who were also in the South Tower Lobby when it collapsed.

Please remember this courageous young man on his birthday…and always remember all those we lost on 9/11. Happy birthday, Welles.