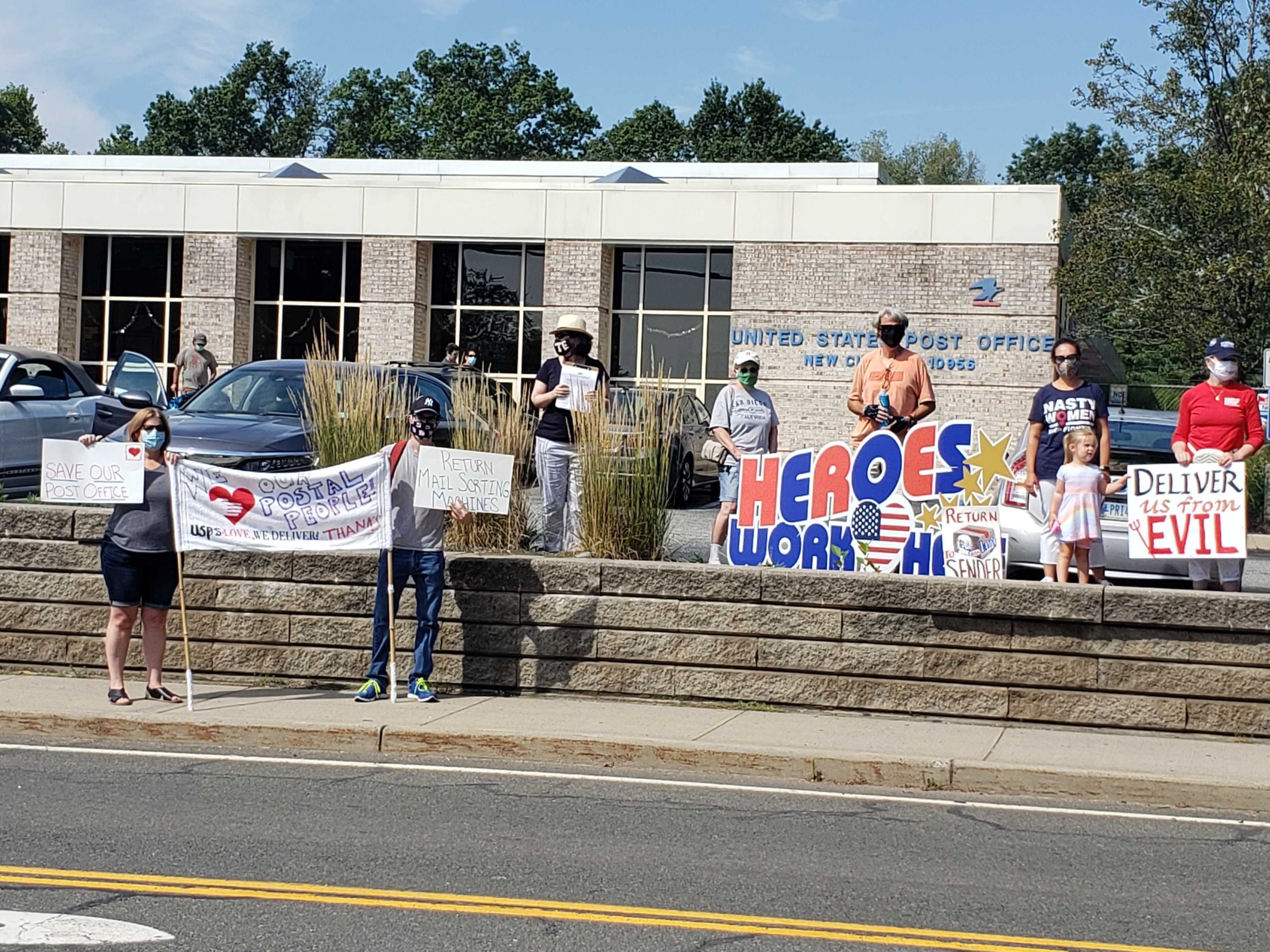 ROCKLAND COUNTY, NY – Over 150 Rockland County residents showed up at post offices in New City and Nyack on Saturday, August 22nd, to protect the Post Office from Trump and declare that Postmaster General DeJoy must resign. This action was part of a nationwide mobilization that took place simultaneously at over 800 post offices across the country. 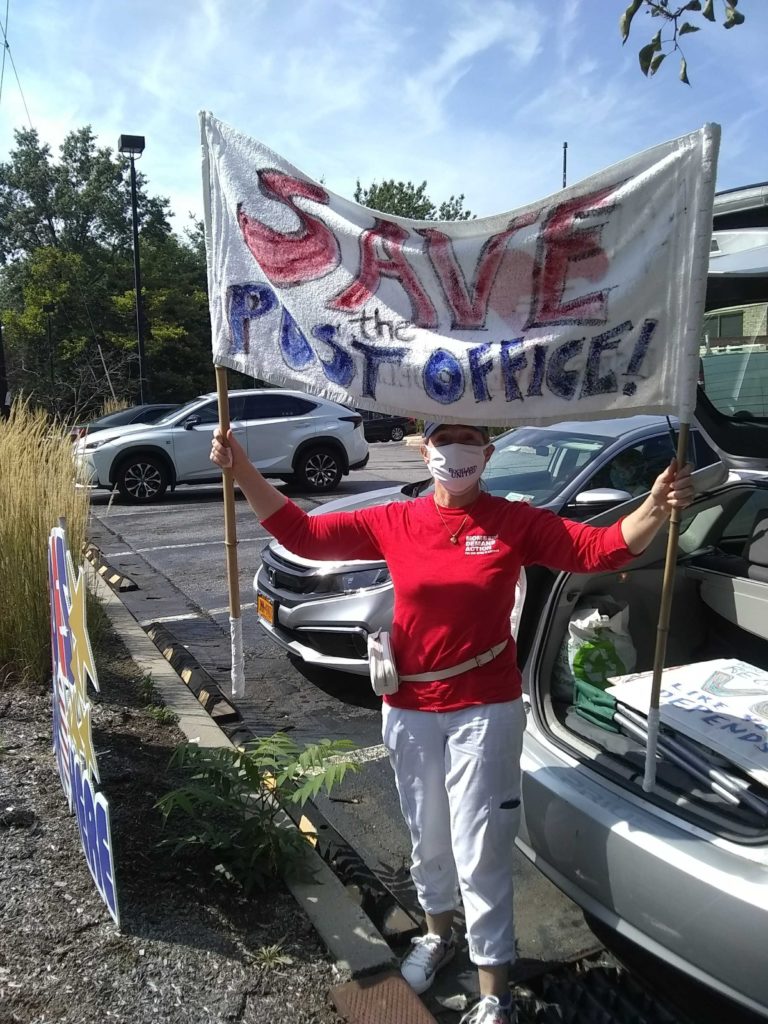 This coordinated action occurred in response to recent events following Trump’s June 16th installation of mega donor, Louis DeJoy, as the new Postmaster General. In just two months, Postmaster General DeJoy has reassigned or displaced dozens of postal executives. DeJoy has called for hiring freezes, slashed hours, and created long delays, even stopping delivery in some places. Meanwhile, it has come to light that DeJoy had a multimillion-dollar stake in the USPS’s competitors.

The continued assault on the Postal Service is not only a clear attempt by Trump and DeJoy to sabotage vote-by-mail ballots in November, but also a hit on vulnerable populations across the country who rely on the USPS for essential goods, medications, and other services.

In a televised interview on August 13th, President Donald Trump told Fox Business morning that he would block additional funding and election assistance for the US Postal Service to sabotage mail-in voting. When asked, Trump said, “They want $25 billion — billion — for the post office. Now they need that money in order to have the post office work so it can take all of these millions and millions of ballots…But if they don’t get those two items, that means you can’t have universal mail-in voting.” 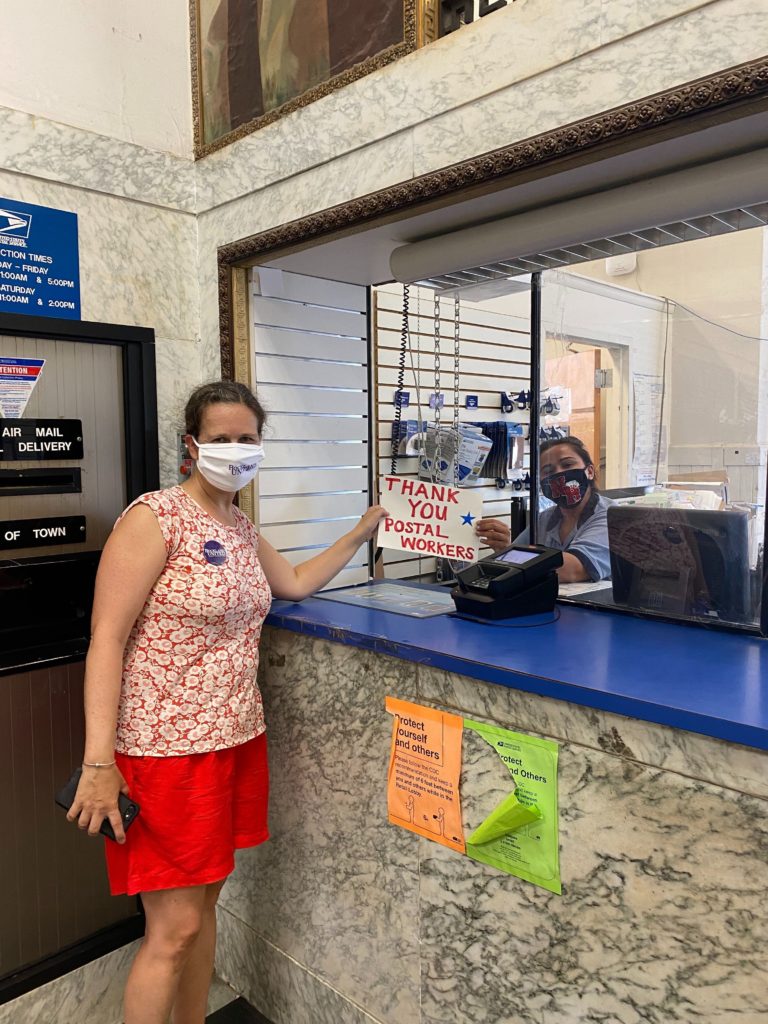 Suzanne Hollmann, an organizer with Rockland United, stated, “We are determined to defend the essential services provided by the United States Postal Service—including our ability to vote by mail—and will push back on the Trump administration’s attacks.“ She showed up to today’s protest with a mask, hand sanitizer, and her elementary school aged son, who proudly sported a sign that read “Hands Off Our Post Office.” 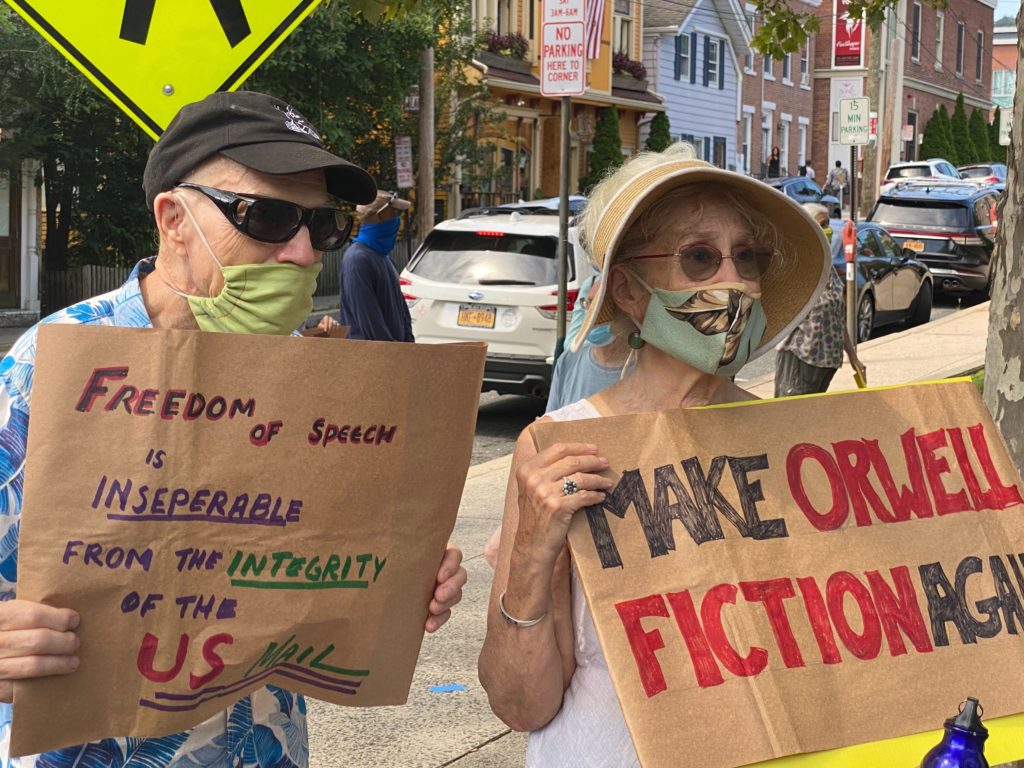 Ivanya Alpert, former Village of Piermont Trustee and a steering committee member of Rockland United, expressed similar sentiments: “My 76 year old mother has never missed an election in her life. She is terrified of going to the polls to vote during a pandemic, but she will if she has to,” she said, “I can’t believe that Trump and DeJoy are willing to put older people like my mom at risk because they can’t win an election without voter suppression techniques like sabotaging the postal service.” 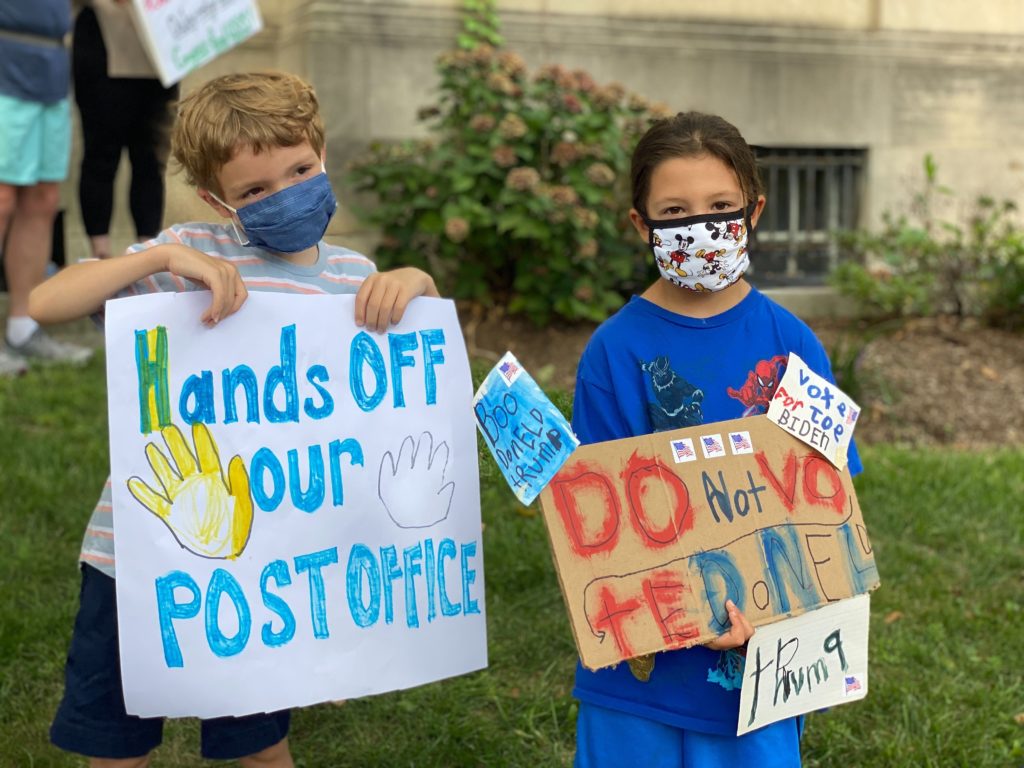 “In this crippling CoVid era, the postal service is more than ever an integral part of American life,” said Emily King, the organizer of the New City demonstration. “People in this town rely on the United States Postal Service for medications, paychecks, social security checks, and mail-in voting. They have found ways to create small businesses and non-profits that rely on the Post Office for reliable and reasonably priced shipping. Now even that lifeline is being destroyed by the government turning against its own public service. I wanted to bring this kind of rally in support of our postal workers to New City because they touch all of our lives. Every mailed-in ballot in Rockland will be delivered through this little branch to the Board of Elections. With half the employees, twice the work and now no ability to work overtime to finish each day’s workload, our postal people have been critically hamstrung by their own upper management. They have always been there for us. Now it’s our turn to stand up for them!” 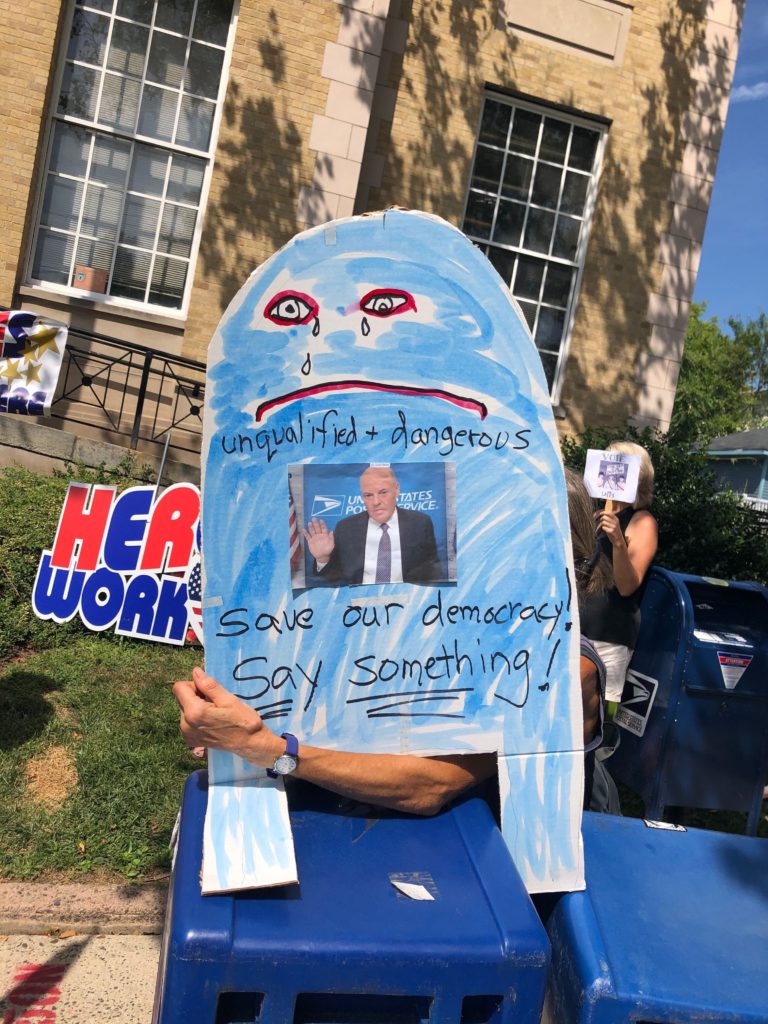 Residents attending the rally clapped for those who were using the post office, encouraged everyone to buy stamps, and took a few minutes to thank the postal workers for all their hard work. 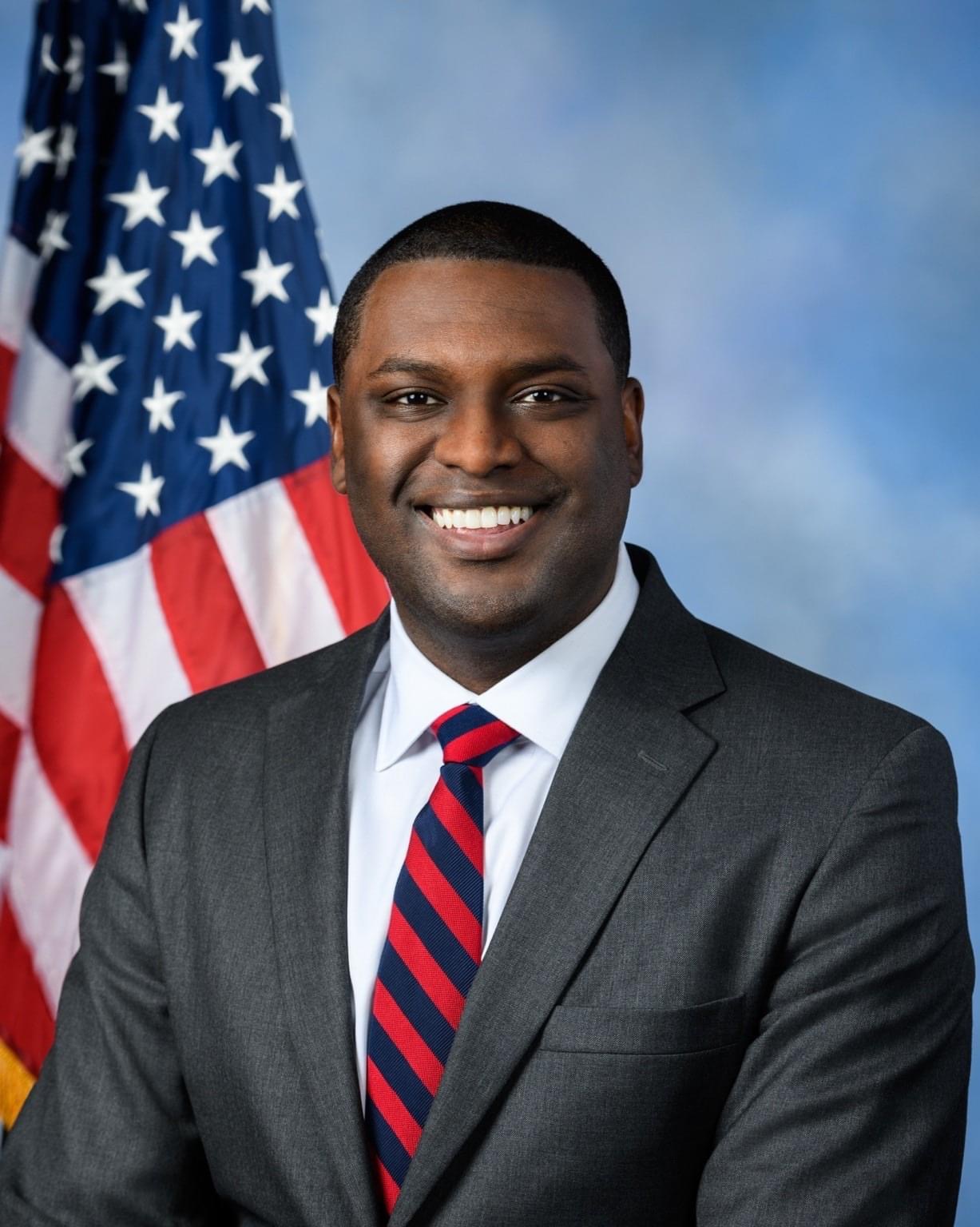 NYACK, NY – Congressman Mondaire Jones (D-NY) announced his endorsement of Melanie Stansbury for Congress in New Mexico’s First Congressional District. Stansbury is running in the June special election to replace former Congresswoman Deb Haaland, who was confirmed as Secretary of the Interior earlier this year. Stansbury is the third candidate to earn an endorsement this cycle from Jones and his political action committee, Policy is Personal PAC, which he launched in April.

“We need more people in Congress for whom policy is personal, which is why I’m so excited to endorse Melanie Stansbury in New Mexico’s First District,” said Jones. “Like me, Melanie grew up in a working-class family and knows firsthand what it’s like to struggle to get by. As a STEM professional and lifelong public servant, Melanie understands the urgent need to address our most pressing challenges — from the climate crisis to COVID-19 — with bold, progressive, evidence-based policies. I know she will carry on the legacy of my friend Deb Haaland as a powerful progressive voice for working- and middle-class New Mexicans, and all Americans.”

“I’m honored to have the support of Representative Mondaire Jones. Now more than ever, we need leadership fighting for a more equitable recovery that centers support for struggling families, reopening small businesses, bringing home good paying jobs, and providing access to affordable health care,” said Stansbury. “In Congress, I will be proud to work alongside Rep. Jones to pass critical legislation that moves forward the structural change we need to ensure no one is left behind as we put the country back on track.” 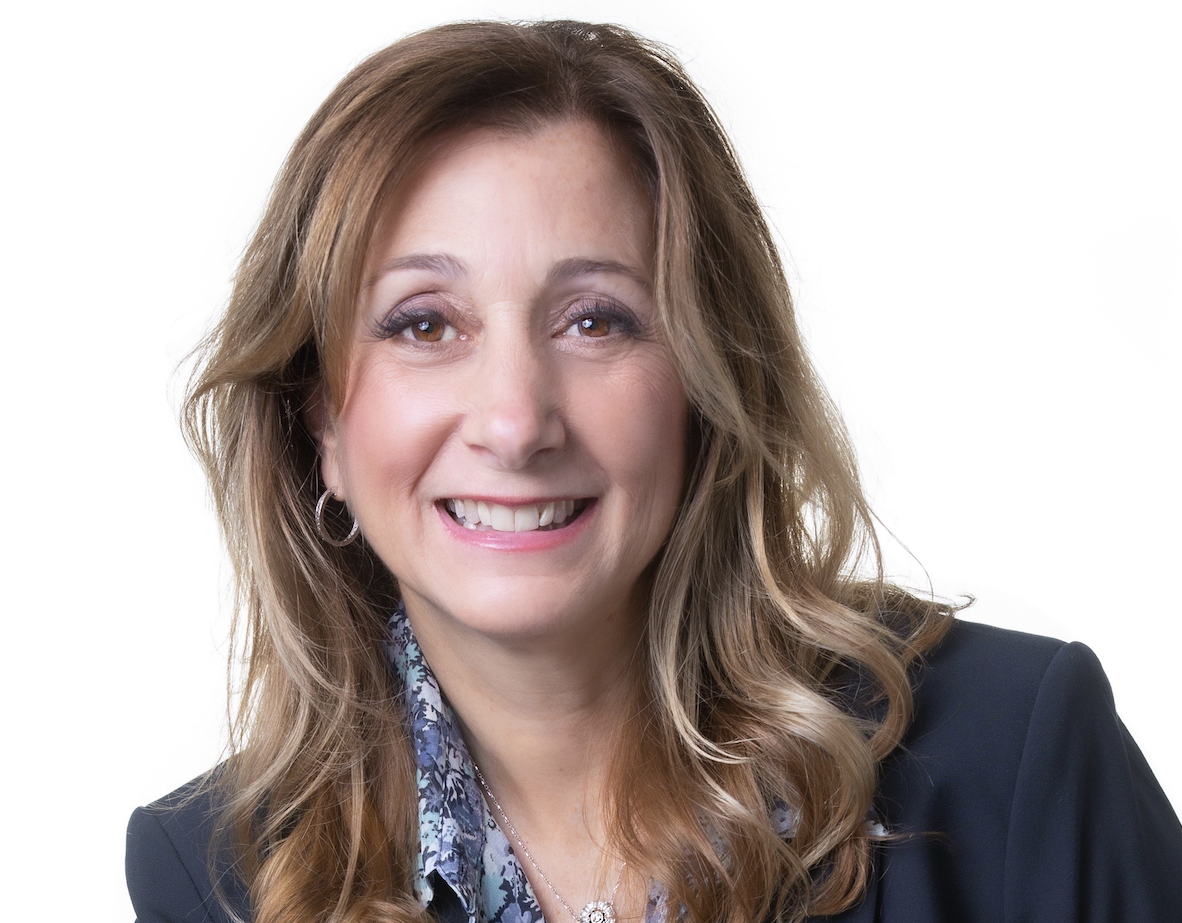 NEW CITY, NY – Town of Clarkstown Town Attorney Leslie Kahn in a post on Facebook announced her candidacy for Clarkstown.

Kahn is on the ballot for the June 22, 2021 Primary Election on the Democratic, Republican, Conservative and Working Families. If elected, Kahn would be the first female Justice in Town of Clarkstown history.

Below is a short bio for Leslie Kahn:

I have been a practicing attorney for thirty years and have dedicated my career to serving the public. I am currently the Town Attorney for the Town of Clarkstown where I counsel the Town Boards and Commissions on legal issues. I prepare local laws and resolutions and assist with the defense of lawsuits brought against the Town. I also prosecute violators of the Town Code and have significantly increased the number of prosecutions related to building and zoning code violations.

Prior to my employment with the Town of Clarkstown, I was a prosecutor in the Brooklyn District Attorney’s Office for twenty five years. I concentrated in the areas of domestic violence, juvenile crimes, alternative to incarceration programs and gun violence. I have extensive litigation experience having tried hundreds of cases, both felonies and misdemeanors. I have also presented numerous cases to the grand jury and trained Assistant District Attorney’s in case management and trial preparation.

During my tenure with the Brooklyn District Attorney’s Office I held the positions of Bureau Chief of Domestic Violence, Chief of Firearms Prosecution and Chief of Adolescent Diversion Programs. I am extremely familiar with specialized courts as I was involved in creating the first juvenile domestic violence court in the nation as well as the integrated domestic violence court and the adolescent diversion court in Brooklyn.

Throughout my career, I’ve dedicated myself to serving the public, ensuring justice and equality for all New Yorkers, and enforcing our laws without fear or favor. As Town Justice, I will use my experience, my integrity, and my compassion to apply the law fairly and make sure Clarkstown remains a great place to live for all of our families.