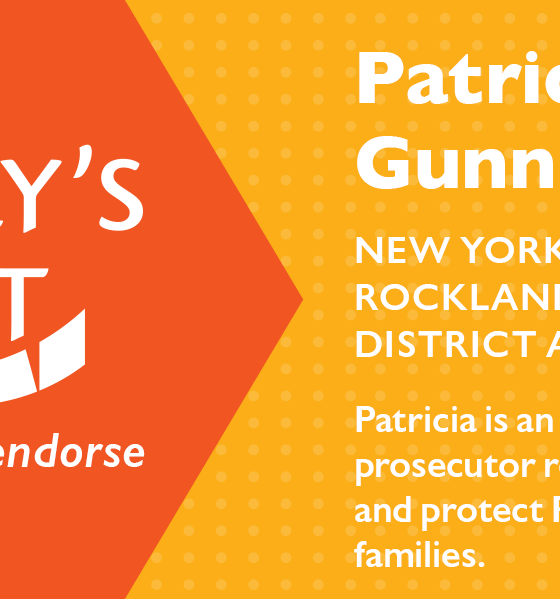 EMILY’s List, is a national political organization that supports Democratic women who endorse abortion rights. It was created in 1985, and most recently help elect Leticia James as New York’s Attorney General. The organization has over 3 million members.

Patricia Gunning most recently served as Special Prosecutor and Inspector General for the Justice Center. She handled investigation related to reports of abuse and neglect and prosecuted allegations that arose to the level of criminal offenses.

Before that, she served as the Chief of the Special Victims Unit with the Rockland County District Attorney’s office. In that position, she managed all phases of the prosecution of cases involving the abuse and neglect of individuals with mental and physical disabilities, the physical and sexual abuse of children and the elderly, as well as victims of domestic violence. In addition, she conducted training on issues related to special victims for law enforcement officials, medical professionals and local community groups. From 2003 to 2008, Ms. Gunning was an Assistant District Attorney for Kings County, where she served in the Crimes Against Children Bureau. In this position, she also managed cases involving the abuse of individuals with disabilities, working closely with law enforcement and crime victims at all stages of the criminal prosecution, both pre and post arrest. During her tenure, she handled a large volume of both misdemeanor and felony cases.

With more than 14 years experience, Patricia Gunning has prosecuted thousands of cases as an Assistant District Attorney in Brooklyn, Chief of the Rockland District Attorney’s Special Victims Unit, and as Special Prosecutor and Inspector General for the New York State Justice Center.